The exquisite pear-shaped diamond is often referred to as the teardrop cut due to its interesting shape with a rounded bottom and narrow, pointed top.

This diamond takes a cue from both the round brilliant and the Marquise cuts, combining both of their brilliance and designs into one unique shape. Although it is known and loved in today’s world, where did this incredible pear shaped diamond come from? 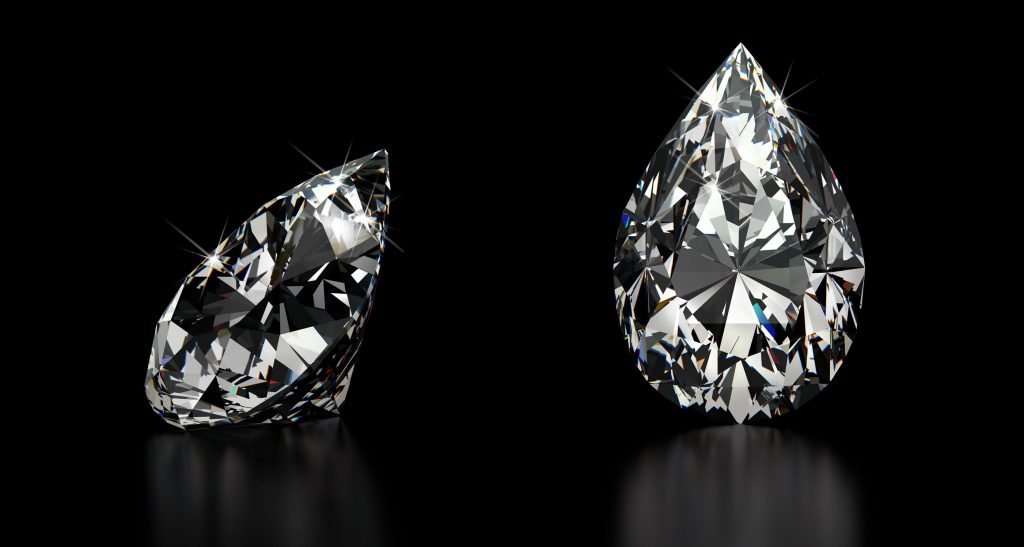 Its origins trace back to 1458, created by Flemish polisher named Lodewyk van Berquem. Does this name sound familiar? If so, it could be because van Berquem was the same diamond cutter who is responsible for the concept of symmetry and placement of facets in popular diamond cuts. Without van Berquem, diamonds would not be cut in a certain way to maximize the shine and sparkle that radiates from each rock.

Even though people were not immediately smitten with the pear shaped diamond when it was introduced, times sure have changed! Many celebrities, from Victoria Beckham to Katherine Heigl have rocked the pear-shaped diamond engagement ring, but perhaps the most famous diamond in this shape was worn by none other than Elizabeth Taylor.

The Taylor-Burton Diamond, a 69.42-carat pear-shaped diamond, was originally cut by Harry Winston and set in a platinum ring. It was sold in 1967 but put back up for public auction on October 23, 1969. Bidding started at $200,000 and biggers included Richard Burton (Taylor’s then-husband), as well as Harry Winston, the Sultan of Brunei, Aristotle Onassis (of Jackie Onassis’ fame), and Robert Kenmore, who owned the parent company of the jewelers Cartier.

Kenmore, and thus Cartier, won the auction, and named the diamond the “Cartier Diamond.” However, Richard Burton was dead-set on getting the diamond for his love and diamond aficionado, Elizabeth Taylor. He had his lawyers contact Kenmore to buy the diamond regardless of price. It was sold the next day for $1.1 million, and given to his love and diamond and was renamed the name it still carries today, the Taylor-Burton Diamond.

Part of the purchase, however, was that Burton and Taylor agreed to allow Cartier to display the gem in their New York store for a period of time—during which up to 6,000 visitors a day would flock to catch a glimpse of this mesmerizing diamond.

The Pear-Shape Diamond (and other soft-sided fancy shapes such as Marquis and Oval) are among the shapes that show color the strongest.  The only two shapes that perhaps show color more than this grouping are the Cushion Cut and Radiant Cut.  When setting the stone in white gold or platinum, it’s best to have a pear shaped diamond in a high clarity.  If you’re setting it in yellow gold or rose gold.

If you’re out there looking for the best diamond for your money, then please contact us and let us know your budget and what you’re looking for. We’ll sift through thousands of diamonds online and send you suggested stones choose from that fit you needs the best. Since we custom design all of our jewelry pieces you will fall in love with your one-of-a-kind jewelry piece.